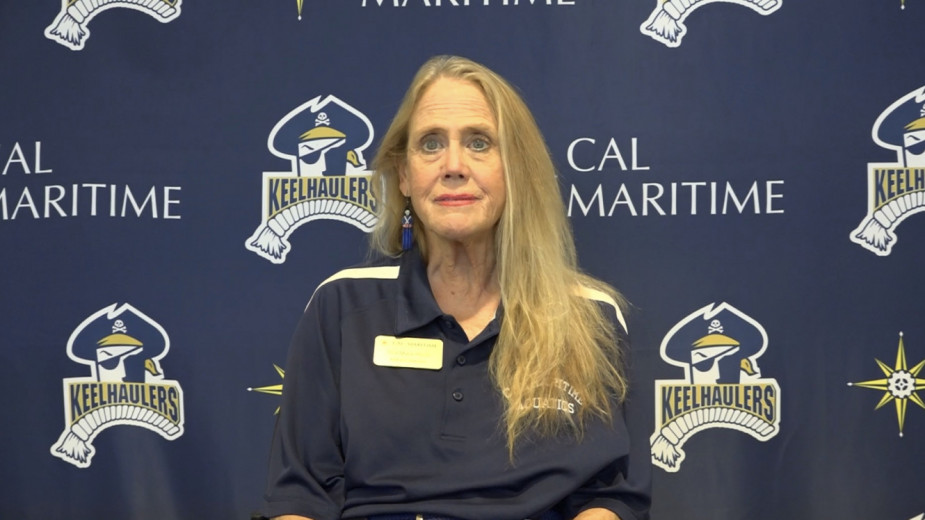 Rossi came to Cal Maritime to run the Aquatics Program when the Physical Education and Aquatics Center opened in 2014.

"It was the first time in my career I was tasked to open a brand new 50-meter pool specifically built to meet Coast Guard training requirements," Rossi said. "I revised the swim assessment and swim instruction classes to better prepare the students for their Marine Survival Training courses and hired and trained staff to lifeguard our specialized Marine Survival Training Programs."

"I was quite surprised to receive this award which is only awarded once per year to true aquatic professionals," Rossi noted after finding out she won the Lifetime Achievement Award. "This award represents everything aquatic professionals strive to be and I'm honored to join the others who have received this prestigious award."

It's certainly not the first prestigious award Rossi has received.

"I rendered CPR to a bicyclist who suffered cardiac arrest and with the help of a Marin County Sheriff arriving with a defibrillator, we were able to stabilize the victim until EMS arrived," Rossi said. "I received the highest civilian honor you can receive from the Marin County Sheriff's Department in a special ceremony at the Marin County Civic Center. The certificate hangs on the wall in my office."

Rossi has been with the BAPPOA since the very beginning.

"I joined BAPPOA at its inception when it was just a handful of pool managers getting together to discuss various aquatic oriented topics," Rossi added. "It has evolved into one the preeminent Aquatic Organizations in California. We are often consulted by other organizations, and municipal and statewide agencies for advice, input, and review of current and potential aquatic codes that affect the entire aquatics community."

The BAPPOA awards program was created for aquatics professionals to recognize their peers and colleagues. The various awards presented signify exceptional achievement and outstanding contributions to the industry.

Nominations for each award may be made by anyone familiar with the nominee's aquatics career. Except in rare cases, the nominee must be an active, contributing member of BAPPOA and/or BAPPOMA. One or more awards may be given in each category based on the nominations submitted.

The Lifetime Achievement Award is given to members of BAPPOA who have been an active member of BAPPOA for at least five years, are within five years of retirement, have served on the BAPPOA Steering Committee or CPRS Aquatics Section Board for at least two terms collectively, accepted responsibilities and performed services over and above the normal standard within BAPPOA, introduced new ideas or practices with successful and effective results within the association, and have maintained exceptional moral and safety standards.

The Steering Committee was formed in the late 80s to assist in guiding the operations of the Bay Area Public Pool Operators Association, with the Steering Committee became a Board of Directors.  There are nine Board Members, all members of BAPPOA.  Each Board Member, except the Vice President, serves a term of two years on the board and then rotates off. The Board of Directors meets a minimum of four times a year.

Over the years, the BAPPOA has grown from a small group of pool operators meeting every other month to a much larger group that continues to meet on the original schedule. In January 2009, BAPPOA adopted by-laws and is on it's way to becoming a 501(c)3 non-profit organization.  BAPPOA continues to meet six times each year and hosts social events, educational trainings, and competitions, monitoring changing legislation and guidelines, and conducting up to four surveys each year are other valuable services BAPPOA provides to its membership.