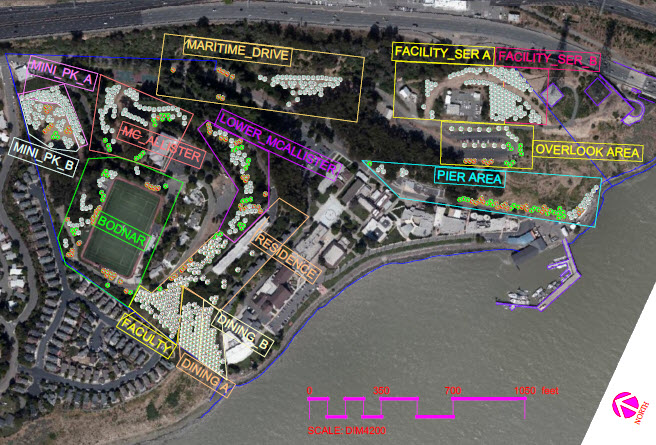 On the dramatic afternoon of October 27, 2019, the Glen Cove Fire leapt across Interstate 80 and threatened Cal Maritime’s campus. Thanks to the quick response of the Vallejo Fire Department and other first responders — including cadets and staff — damage was contained to a small area. However, the campus did suffer a significant loss to one of its defining features, its tree population. In the months that followed 400 affected trees, including native species, had to be removed, visibly baring a large area.

But not for long. The Campus Tree Advisory Committee quickly set to work creating a plan to bring in 800 new trees, doubling the number lost. With the support of the Arbor Day foundation and a local volunteer professional, three species of native trees have been selected, all with low water requirements. Look for seedlings of Quercus agrifolia (California Live Oak), Cercis occidentalis (Western Red Bud), and Aesculus californica (California Buckeye) to begin filling the campus with new greenery soon. Once again cadets will be called in for help — this time for planning, organizing and participating in a series of planting events.