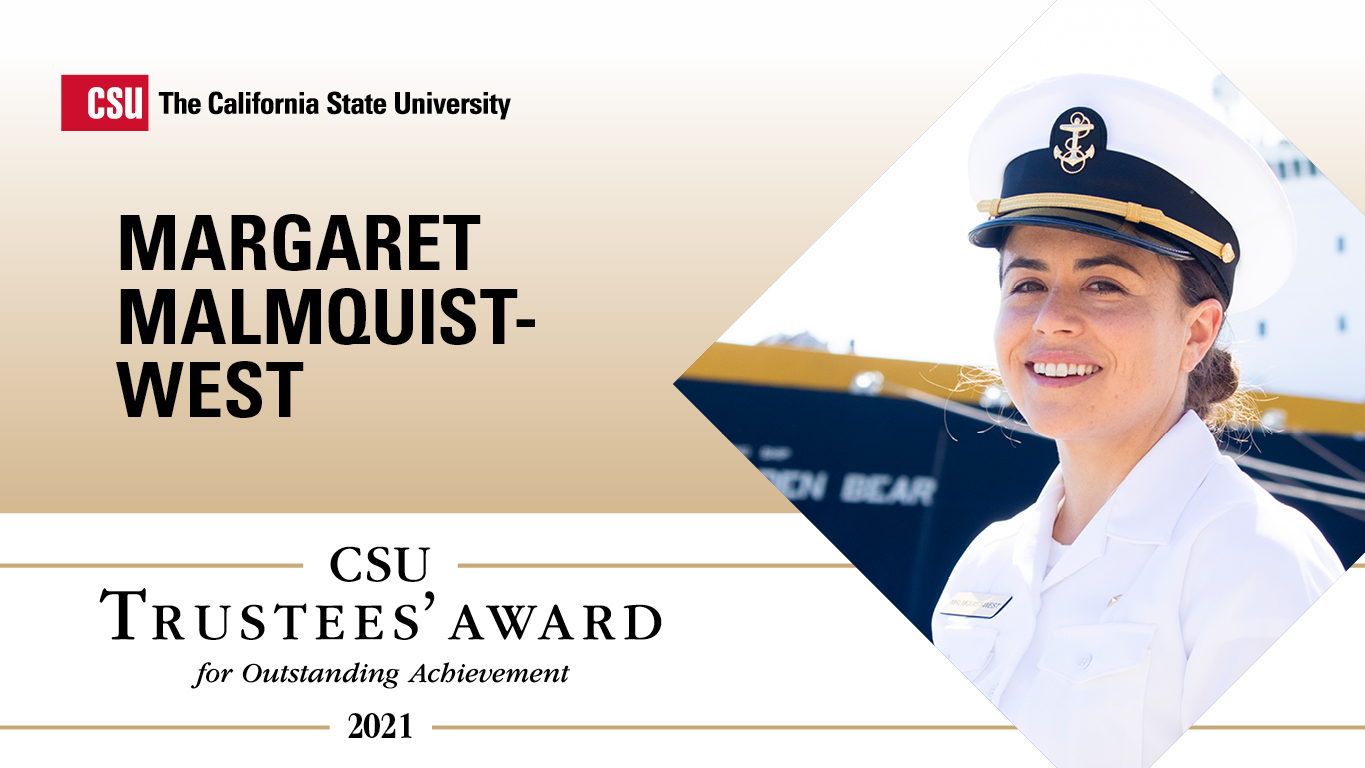 Margaret Malmquist-West ’23 has been named the Jack McGrory Scholar for 2021, one of 23 California State University (CSU) students who has been selected to receive the 2021 Trustees’ Award for Outstanding Achievement. The students will be acknowledged for their talent, determination. and drive during a ceremony as part of the CSU Board of Trustees virtual meeting to be held on Tuesday, September 14.

Malmquist-West grew up thinking a STEM discipline would be too difficult and feared being alienated in the male-dominated engineering community, she says. At 28, after spending years working in various education and service jobs, she began the daunting process of returning to school. This meant going back to take lower-level math and science courses—and completing GE requirements—while working full-time.

In 2020 at the age 31, Margaret enrolled at Cal Maritime, where she is majoring in mechanical engineering and pursuing a merchant mariner credential in marine engineering. She is on the President's List for outstanding academic performance and plays on the intercollegiate women's soccer team.

“Every decision I have made has deliberately landed me in challenging situations that required me to become a better person and a confident leader,” she shares. " The funding has allowed me to obtain stable housing and work fewer hours outside of school. This gives me the time necessary to study and play soccer with the Keelhaulers. The award is truly life-changing for me."

Margaret works part-time as the COO at Girls Who Click, a nonprofit that empowers female-identified and non-binary youth and teen girls through nature photography workshops.

After completing her degree, Margaret plans to join the Coast Guard Reserves while working as a design engineer in the San Francisco Bay Area.

CSU Chancellor Joseph I. Castro lauded Malmquist-West for her achievement along with all the Trustee Award recipients.

“These 23 scholars wonderfully exemplify the ideals of the California State University,” said Castro. “Every year, and especially this year, our Trustees’ Award honorees demonstrate resilience, tenacity and resolve—together with a keen intellect—while making an indelible, positive impact on their families and their communities. They are truly an inspiration.”

More than 400 students have been honored with the Trustees' Award since the scholarship program was established in 1984 by the William Randolph Hearst Foundation. In 1999, the Hearst Foundation partnered with the CSU Board of Trustees to supplement the endowment with contributions from CSU Trustees, CSU Foundation board members and private donors. Each student scholarship bears the name of a donor.