Sailing Team Hits the Road, and the Water 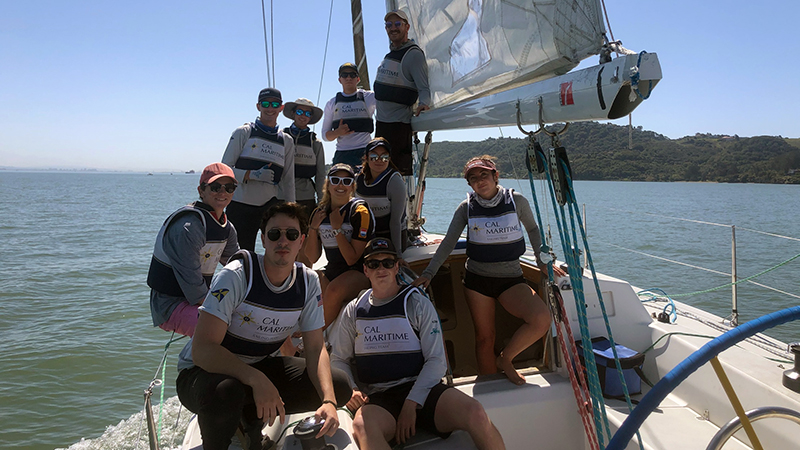 The Cal Maritime sailing team gets the 2021-22 competitive season underway for all Keelhauler sports teams when it travels to this weekend's Shields Trophy Regatta, an annual competition between United States service academies hosted by the Naval Academy. The Regatta takes place Sept. 18 -21 in the Chesapeake Bay.

Cal Maritime has won the Regatta on nine occasions and is competing at the event for the first time since 2019.

"The Shields Trophy Regatta is important to Cal Maritime because it is one of our only opportunities to compete against the other service and maritime academies," said junior helmsman Kyle Collins. "There's a saying at Cal Maritime that 'everyone can be a student, but not everyone can be a cadet.' This holds true for all the other midshipmen and cadets from other academies. The levels of performance, motivation to succeed, and professionalism really increase at this event."

This weekend's trip to Annapolis also marks the start of a new campaign for many of the returning cadet-athletes. After missing an entire season due to COVID-19 pandemic, the Keelhaulers cherish the opportunity for comradery on the road. The last time they were able to compete was the Harbor Cup in March 2020.

Last year was a challenging year for all cadet-athletes, but I was encouraged about how all adjusted and did their part," said Director of Athletics and Physical Education Karen Yoder. "To have our sailing team kick the season off against its fellow service academies is a great honor."

"With most of the team from our 2020 squad returning this year, we are expecting high results," said senior main trimmer/tactician Brock Paquin. "I'm looking forward to traveling with the team again and being able to share the laughs we used to have while on the water between races."

The cadets competing this weekend know they're not just doing it for their program.

"I would like to set the bar high for the rest of the athletics teams on campus and represent Cal Maritime to the absolute best of my ability," said Collins.

The following teams will be competing this weekend:

Results will be posted to scores.collegesailing.org throughout the weekend.