Cal Maritime Pitches in to Protect The San Francisco Estuary 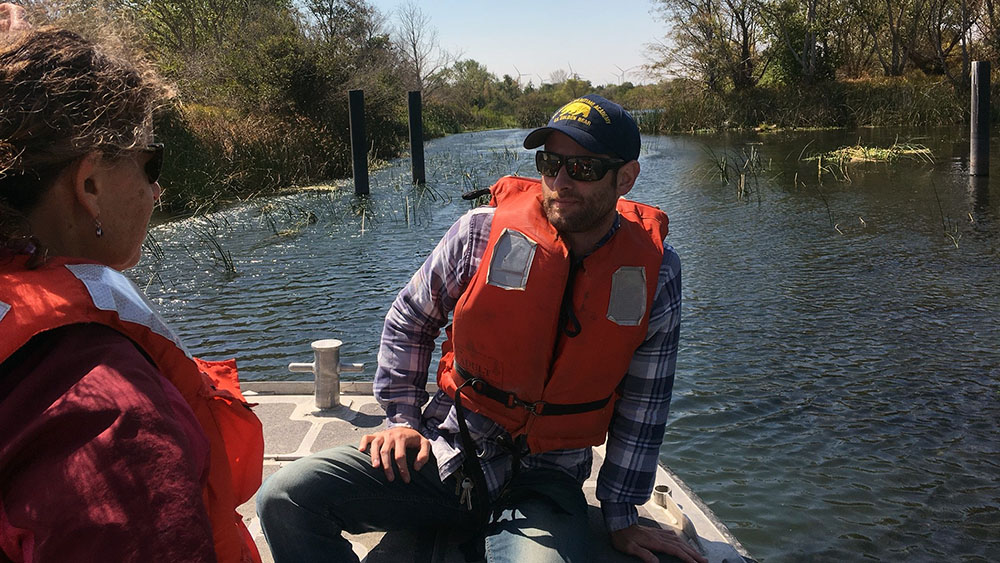 This spring Dr. Alex Parker, associate professor of oceanography at Cal Maritime, will team up with researchers from San Francisco State University and the University of Maryland on a two-year study to investigate how the San Francisco Bay Delta ecosystem will respond to large decreases in nutrient pollution resulting from changes in municipal wastewater.  Wastewater treatment plants typically discharge into estuary and coastal waters, resulting in problems including unsightly or noxious algal blooms or the depletion of dissolved oxygen that can kill fish and invertebrates.

The Sacramento Regional Sanitation District, the major discharger to the San Francisco Estuary Delta, is poised to implement a decade long, ~$2 billion upgrade, called the EchoWater Project. The project will reduce the amount of nitrogen discharged to the Delta by more than half of present levels, including nearly a complete elimination of one form of nitrogen, ammonium.  Nitrogen fuels the growth of algae and bacteria that act as the base of aquatic food webs.

“The San Francisco Estuary Delta is the heart of California’s water infrastructure. Roughly half of Californian’s receive their drinking water from the estuary and much of the water used for agriculture in the Central Valley originates here”, Parker explains.  “We have seen declines in water quality, including increases in toxic cyanobacterial blooms in the Delta over the past several decades. It is critical that California is proactive in order to maintain our healthy freshwater resources.”

Examples of the negative effects of nutrient pollution include the “dead zone” in the Gulf of Mexico, fueled by agricultural nitrogen and phosphorus pollution from Mississippi River and toxic algal blooms that plague the Great Lakes and contaminate and shut down municipal drinking water systems.  The Sacramento upgrade represents a rare ecosystem-scale “experiment” that will allow scientists to measure the effect of nutrient reductions over large geographic and time scales.

Parker and colleagues just completed an initial project to capture the “baseline” conditions in the Delta prior to the upgrade.  Project findings will not only help inform water regulations in California but will be relevant across the US and the world.  Part of the funding will support Cal Maritime students to complete summer research co-ops under Parker’s supervision. Oceanography students will join the team of researchers and will participate in boat surveys of the Delta as well as conduct experiments in the laboratory.  “Our students will apply what they have learned in our classes to a real-world problem, hone workforce-ready skills, and build professional networks necessary in preparing to enter the workforce,” Parker says.