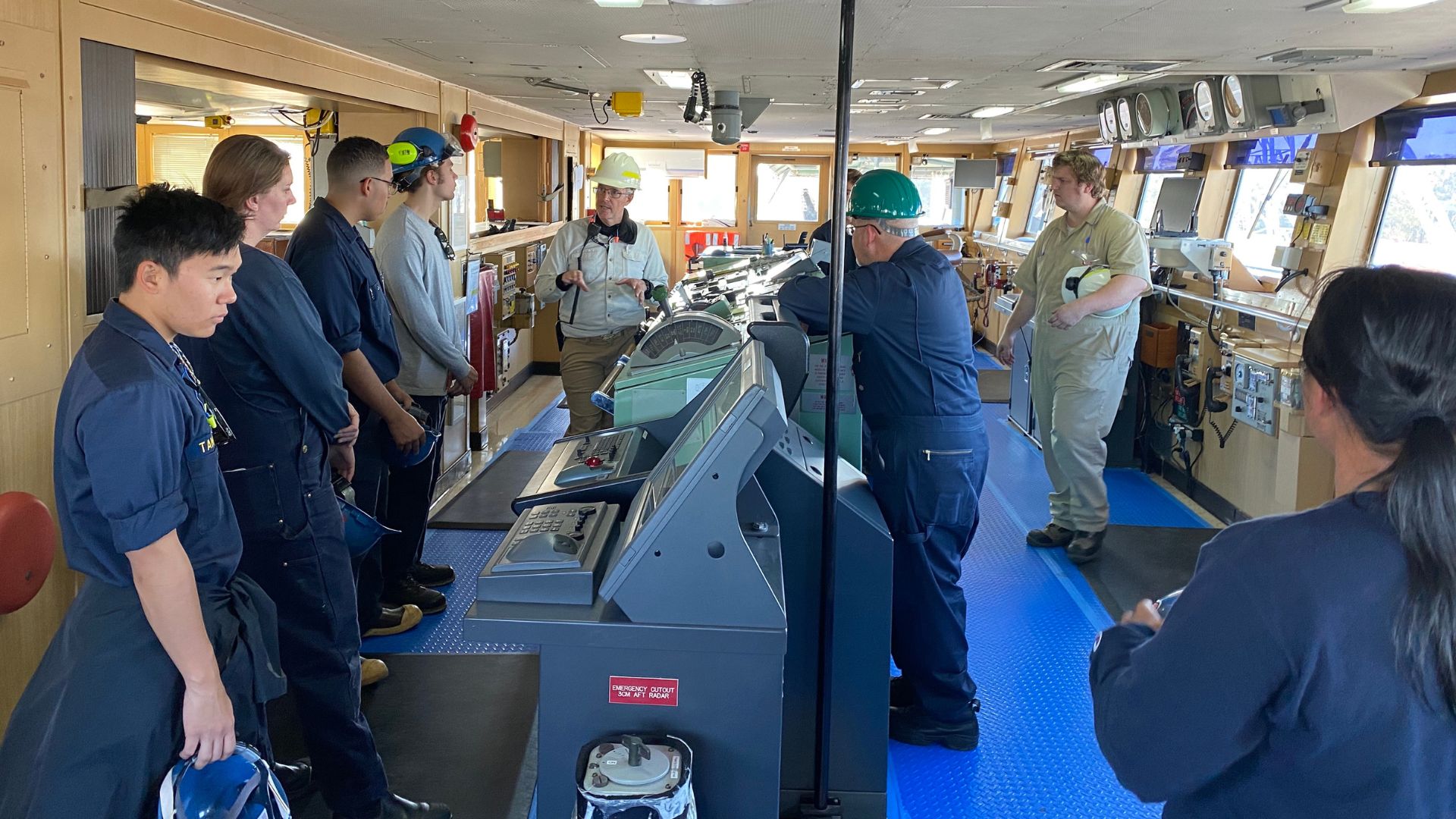 Cal Maritime deck and engineering cadets also had the opportunity to tour the USNS PECOS (T-AO-197) on three separate occasions during the vessel’s shipyard at Mare Island.

This fall semester, our marine engineering and marine transportation cadets have been busy getting hands-on experience with major vessels at Mare Island Dry Dock in Vallejo. Through a partnership between Cal Maritime faculty, staff, and industry leaders, the M/V WILD PEONY and USNS PECOS  opened specifically for our deck and engine cadets who were able to participate in several small tours with each vessel’s respective senior officer.

Cal Maritime engineering cadets had the opportunity to witness the unique repair of the M/V WILD PEONY, a refrigerated cargo ship that trades worldwide. The WILD PEONY recently suffered a stern tube casualty after leaving New Zealand where she loaded a cargo of palletized kiwifruit and apples bound for Los Angeles.

After the ship’s crew was unable to effect repairs, tugboats were dispatched from Fiji and Taiwan, where the ship was then under tow for approximately two months until she was able to berth in Los Angeles. Once there, she discharged her cargo then went to anchor, while the owners located a drydock.

The ship owners were able to book space at Mare Island Dry Dock, but the ship had to wait at anchor in Los Angeles for about a month-and-a-half before being towed to Vallejo.

While at Mare Island, cadets had the opportunity to witness the unusual set of repairs the ship is currently undergoing including the removal of two intermediate shafts and the withdrawal of its propeller shaft.  Once that is done, the stern tube bearing will be inspected and renewed before everything is put back together.

The tour provided a great learning experience for Cal Maritime’s engineering cadets to witness something that is uncommon, especially since most of the officers on the WILD PEONY are graduates of maritime academies in Russia and were able to interact with cadets from an American university and compare notes.

“You don’t see this kind of thing every day,” said Matthew Fenton, a 1982 Cal Maritime engineering alum who is leading efforts to help in the repair of the WILD PEONY with Brookes Bell. “The master and I began the visit with a briefing about the vessel’s stern tube casualty, the actions taken to bring her to a port of refuge and now into repairs. I discussed the role of the various insurers and financial interests to provide the cadets with context.”

According to Fenton, once briefed, cadets visited the engine room where they were able to view the machinery and the arrangements made for removal of the intermediate and propeller shafts, including rigging, and hull penetrations and repair; cadets also had the opportunity to view stern tube internals.  The deck officers introduced cadets to the bridge, and the master led them into the cargo holds of this refrigerated cargo vessel and discussed the arrangements needed to successfully carry perishable cargo.

The tour then proceeded into the drydock where the activities that normally accompany routine docking and coating were discussed, including propeller removal and fitting, rudder checks and hull inspection.  The tour concluded with a walk to the Lind Marine machine shop where the cadets were shown the damaged bearing and the new bearing that will be fitted after machining.  Other aspects of the investigation and repair were also presented to the cadets.

“Captain Denis Afanasev and Chief Engineer Sergei Valutskiy and the other officers enjoyed the visit, and have been very complementary about Cal Maritime’s cadets,” said Fenton. “The friendship and hospitality the cadets presented, particularly at this difficult time between Russia and the United States were both unexpected and appreciated. For my part, I was most favorably impressed with their professionalism and deportment.  I found the cadets to be enthusiastic, attentive, and respectful, and I hope that the visit was useful.”

The tour of the USNS PECOS was done in partnership between Military Sealift Command's Lieutenant Commander (LCDR) Craig Froehlich and OIC Sobey, where deck and engineering cadets did two- and three-hour tours of the ship’s cargo deck, navigation bridge, cargo control rooms, underway replenishment stations, and vertical replenishment stations, in addition to the drydock itself.

“These tours of the USNS PECOS at Mare Island provide our deck and engineering cadets with a unique hands-on experience of some of the ships they will be working on in their future,” said Jordan Taylor, assistant professor of Marine Transportation at Cal Maritime. “Thank you to Captain Steve Browne and Captain Tamara Burback for supporting the coordination of getting the cadets over there.”

Next up is the USS FRANK CABLE (AS-40) that will be arriving at Mare Island on Dec. 1 where Taylor hopes to continue these tours for deck and engineering cadets.

Learn more about the Department of Marine Transportation