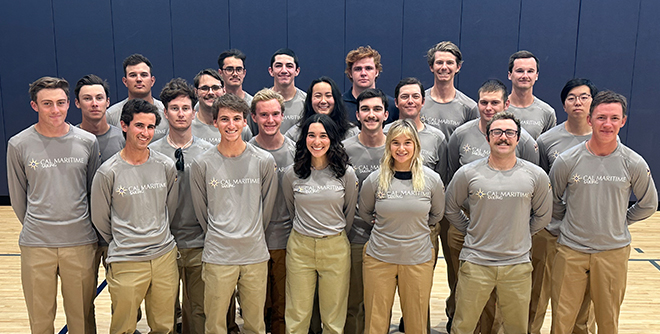 VALLEJO, Calif. – Imagine if Cal Maritime men's basketball competed against the Golden State Warriors, women's basketball squared off against the defending WNBA champion Las Vegas Aces, or members from the men's and women's golf team participated in the Masters at Augusta National or the U.S. Women's Open. That is the exact situation the sailing team will face when it heads to San Diego to compete in the Hot Rum Regatta, hosted by the San Diego Yacht Club.

Taking place all day long at Coronado Roads and San Diego Bay, the Keelhaulers are the only collegiate team participating in this regatta and will compete against 130 boats featuring professional crews.

Cal Maritime cadet-athletes, and appropriate risk management personnel, will compete on the Andrews 77 — the same vessel the crew would like to race in the 2023 Transpacific Yacht Race; by battling a field comprised of professional crews, the Hot Rum Regatta will give cadets an opportunity to strengthen their skills against a first-class field and gain valuable experience to use throughout the program's slate of events taking place next semester.

First warning for Saturday's racing at the Hot Rum Regatta is set for 11:55 a.m., race officials will stagger starting times due to the number of boats that registered for this event. The Low Point Scoring System will apply with boats scored on an overall basis and by respective class. Boats that do not check in before each race are considered DNC and will receive team points that equals the total number of entrants, plus one, for their overall and class scores.

Three races are scheduled to take place throughout the day, the course length is approximately 11.9 nautical miles. Race officials have the authority to create an alternate course, should severe weather take place, Saturday's forecast (at the time of this release) calls for partly cloudy skies and a temperature of 67 degrees.

Once deemed official, visit GoKeelhaulers.com to view the team's spring schedule. The 2023 Harbor Cup, hosted by the Los Angeles Yacht Club and Cal Maritime, will take place at the Port of Los Angeles from March 10-12. The Keelhaulers will enter that regatta as eight-time champions after successfully defending their title.

Sailing will look to three-peat at the Harbor Cup four months after it joined an elite list of schools, which now features six institutions, that won the Kennedy Cup in consecutive seasons after capturing the John F. Kennedy Memorial Trophy for the fifth time in program history when it visited Annapolis, Maryland, in early November.

Keep up with Keelhauler athletics