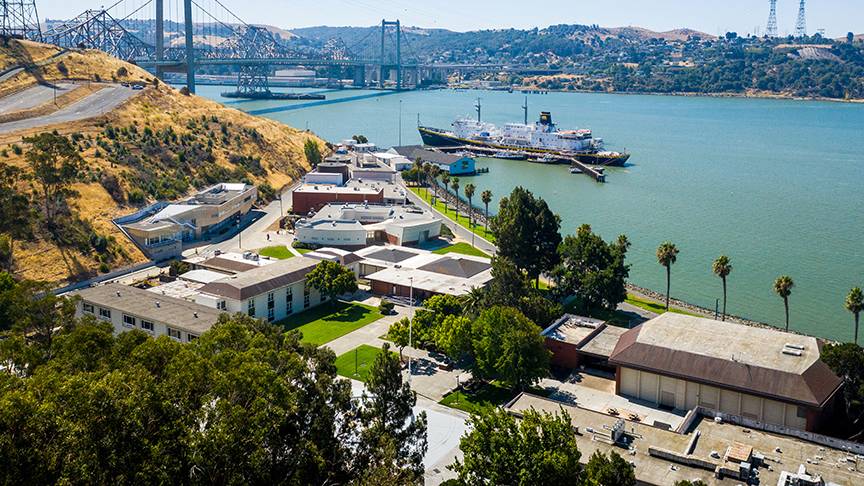 The Training Ship Golden Bear, the training vessel of The California Maritime Academy (Cal Maritime), pulled into the Pier 19 Ferry Terminal in Honolulu this afternoon after an historic two-month international training voyage. Approximately 240 cadets – 10 of whom are from Hawaii – and 50 officers and staff members were onboard as Cal Maritime alumnus and Honolulu Harbor Pilot Captain Ed Enos positioned the 500-foot ship safely at the dock.

The ship’s arrival in Honolulu marks the beginning of “changeover,” or the transfer of cadets, faculty and staff between the first and the second of the college’s annual two-month training cruises. For the duration of Cruise 1, which departed Cal Maritime’s Vallejo, Calif. campus on May 1, students have been responsible for running the ship from stem to stern, including navigating and driving the ship, repairing and overseeing the engines, and maintaining the vessel. All training cruises are supervised by Cal Maritime faculty, the ship’s captain and chief engineer, and a team of experienced mariners.

“The training on this cruise broadens our horizon and gives us a better understanding of what the industry is really like,” said freshman James Casken, a marine transportation major from Kailua, Oahu. “The instructors and seniors together contribute to a greater learning experience. I am sure I do not stand alone, but when I learned how to plot and read a chart, understood radar, and understood the rules of the road, I actually felt like I belonged in this industry.”

Each cadet at Cal Maritime sails on at least one training voyage during their four years at the university. This summer training provides license-track students the hours of sea experience they need to graduate and work aboard ships of any size worldwide.  The training voyage also provides cadets in all majors with a first-hand perspective of the world and its many diverse political and economic systems, business practices, and social customs.

In addition to stops in Honolulu and Lahaina, Cruise 1 visited ports of call in Wellington, New Zealand; Sydney, Australia; and American Samoa. The Golden Bear’s visit to New Zealand was historic because it marked the first time a public U.S. vessel was allowed in the country in nearly a decade.

Captain Bolton, Commanding Officer of the Training Ship Golden Bear, said the training ship was welcomed with open arms at each port they visited.

“This was an exceptional cruise for so many reasons,” said Captain Bolton, a Cal Maritime alumnus from the Class of 1978. “The ambassador receptions in New Zealand and Australia were a huge success, and the weather was perfect in both of those ports. Our rugby team competed against teams from Wellington and Sydney, and that created much goodwill. American Samoa opened their arms to us and made us feel like we were part of their family.  And anchoring off Lahaina is always a blast as we run our own launches and get dropped off at the Pioneer Inn.  Our friends at the Lahaina Yacht Club open their doors for us and the locals seem to really enjoy having our cadets in town.”

It was the moments without the fanfare that had the greatest impact on Casken, whose older brothers Damien and Paul graduated from Cal Maritime in April.

“The biggest highlight of cruise would be all the sights you get to experience, such as the stars at night, the dolphins and whales that joined us on our journey, coming into port and seeing that land come above the horizon,” Casken said.

Aloha Yoza, another Hawaiian cadet traveling onboard this summer’s training cruise, says she enjoyed every minute of her first training voyage. But it was one moment in particular that she will always remember.

“My biggest cruise highlight was doing the Golden Shellback, which is crossing through the equator and international dateline at the same time,” said Yoza, a 2009 graduate from St. Andrews Priory in Honolulu. “Very few people – including a small amount of sailors – are able to accomplish this in their lives out at sea, and having accomplished this on my first cruise was a big deal.”

Yoza added that she is looking forward to the comforts of home when the training ship ties up in Honolulu.

“When I get home I'm looking forward to eating a half pound of poke and a bag of poi while sitting on the beach before I go out and surf,” she said.

This summer’s second voyage of the Training Ship Golden Bear will depart from the Honolulu Ferry Terminal on Friday, July 1 at 9:00 a.m. Onboard for Cruise 2 will be approximately 225 cadets and 50 officers, all of whom will move onto the ship on June 28 to help begin preparing for their departure. Ports of call for Cruise 2 will include the Island of Lanai; Brisbane, Australia; Auckland, New Zealand; and American Samoa. The ship will arrive back to the Cal Maritime campus on August 28.  Those wishing to follow the voyage virtually may visit Cal Maritime’s official Follow the Voyage blog at http://www.cma-virtualftv.org/.