Cal Maritime Captures the Breeze at the 2022 Collegiate Wind Competition 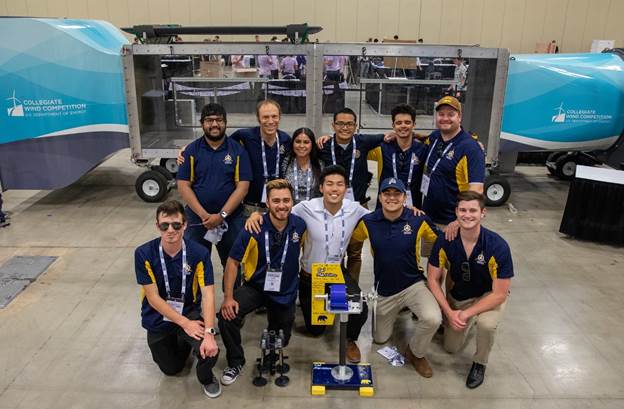 Cal Maritime had a fantastic week at the 2022 US Department of Energy Collegiate Wind Competition (CWC), finishing fourth overall, making many connections in the US Offshore Wind Industry, and, overall, just enjoying the in-person event after a two-year hiatus. The event occurred May 15-18 at the CLEANPOWER Conference and Exhibition in San Antonio, TX.  Twelve universities from across the country competed in the full Competition, with four additional schools participating as ‘learn along’ teams.

The team’s test turbine finished third place in the turbine testing portion of the Competition.  Led by graduating ME senior Kenny Shin, the team chose to refine the design of the past two years, resolving some of its previously unsolved issues with pitch control and braking.  New this year, however, was that instead of the turbine being fixed at its base, they had to design and build a foundation – along with an efficient installation procedure - to support it in a tank filled with water and a sandy bottom.  US DOE organizers added this requirement in order to mimic a real world offshore foundation.  Mechanical Engineering seniors William Laurent and Aaron Breitinger designed a novel quadra-pod jacket structure which utilized sand screw anchors to hold tension loads in the sand.  The foundation had a simple task:  to prevent movement of the turbine over the entire 30 minute test period – and it did just that!  Visitors to the Cal Maritime booth marveled at the innovative foundation design, as well as the highly efficient custom-made generator, variable pitch system, and the team’s trademark aerodynamic and structurally sound blades.   Other engineers included graduating seniors Jacob Piña, Jackie Garcia, and Quinton Cacal, and juniors Jake Nelson and Sid Kumar.

In another area of the competition, GSMA graduating seniors Andrew Cavinta and Will Tucker led a team in developing a detailed plan to install a 154 MW wind farm in the Gulf Mexico off the coast from Galveston.  This plan involved selecting the precise locations of  11 – 14 MW turbines based on wind resource, bathymetry, existing oil and gas infrastructure, and shipping lanes.  It also included the undersea transmission infrastructure, installation, operation and maintenance plans, and a study and mitigation of environmental issues.  Finally, led by senior IBL student Ryan Martinez, they had to develop a detailed financial model.   Judges were very impressed with the quality of their work and professionalism of their presentation.  Although they finished 6th, the point spread in 3rd – 6th place were close enough to be considered a statistical tie. 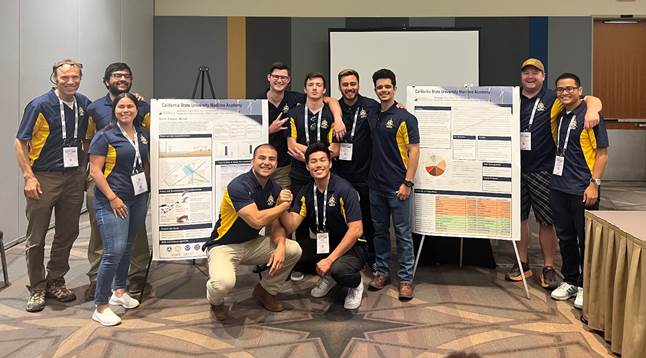 In addition to these tasks, the teams had to present on their outreach and industry connections made over the course of the year.  Their outreach activities included visits to three California high schools, including nearby Benicia and Mare Island Technology Academy High Schools, as well as Arcata High School in northern CA. Besides being the high school where Cavinta attended, this location was chosen because of its proximity to Humboldt Bay where a floating wind farm (possibly to be the first off the Pacific coast) is being planned to revitalize the area as it transitions from a logging-based to a high-tech economy.

In addition to the Competition, the team continued to establish and strengthen meaningful connections in the offshore wind industry.   One exciting connection was meeting the Massachusetts Maritime CWC team.  MMA just started getting involved in the Competition this year.  Our team showed them around, and offered advice for next year.  MMA, with its location in Buzzards Bay, MA, will be at the epicenter of the US Offshore Wind Industry as the installation of the 800 MW Vineyard Wind project – the first large scale offshore project in the US - unfolds over the next few years.

Meanwhile, Hornblower Group, with its longstanding ties to Cal Maritime and the CWC, has become a key supporter of the Cal Maritime CWC team.  As they have pivoted their businesses towards supporting the US Offshore wind industry, they recognize the potential for Cal Maritime to become a major pipeline for the future workforce.  For those students looking for exciting careers involving the sea and the health of our planet, they have several possible career opportunities for you!

Many thanks to Steffan Long, Tom Clyatt, Erin Cole, and the many other faculty, staff, and administrators that have supported this project along the way!