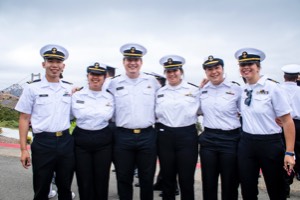 “Cal Maritime students graduate ready to hit the high seas,” the magazine reports. “That’s partly due to the school’s annual training program, in which students live and work aboard a 500-foot ship, the Golden Bear, following an itinerary that might take them through the Panama Canal or across the Atlantic Ocean to Europe.” 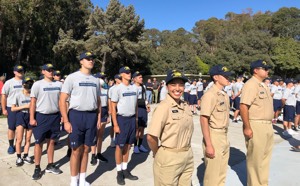 “With small class sizes, and a first-rate faculty, blending classroom learning with applied technology, Cal Maritime graduates enter a workforce poised to engage and lead in a global community,” says President Tom Cropper. “For those of us who live and breathe the institution, especially our talented and committed cadets and alumni, Cal Maritime’s quality and dedication to excellence – and our value, both financially and to the world at large – was never a secret.”

Money highlights the institution’s new oceanography degree, which “fits in well with the school’s maritime theme and waterfront campus.” Further, small class sizes help “to foster a sense of community and close interactions with professors.” The academy also boasts one of the highest job placement rates within the California State University system.

Cal Maritime is one of seven degree-granting maritime institutions in the United States, and the only one on the West Coast. Among that group, Money ranks the academy No. 2, behind Massachusetts Maritime Academy. (The Massachusetts campus ranked No. 4 on the national list. Maine Maritime Academy, ranked No. 16, accounted for the third maritime campus in the top 20.) A companion article entitled Why Maritime Academies Rank High in Money’s Best Colleges’ List dives into the attributes of maritime academies.

The Money rankings were compiled amidst ongoing concerns about the cost of a higher education. A recent survey from the University of Chicago show that three-quarters of Americans view the high price of college as the biggest barrier to earning a degree.

In developing its rankings, Money considered quality and affordability among schools that admit at least 20 percent of applicants.