Men's Basketball Opens the Playbook with "Talking to Strangers" 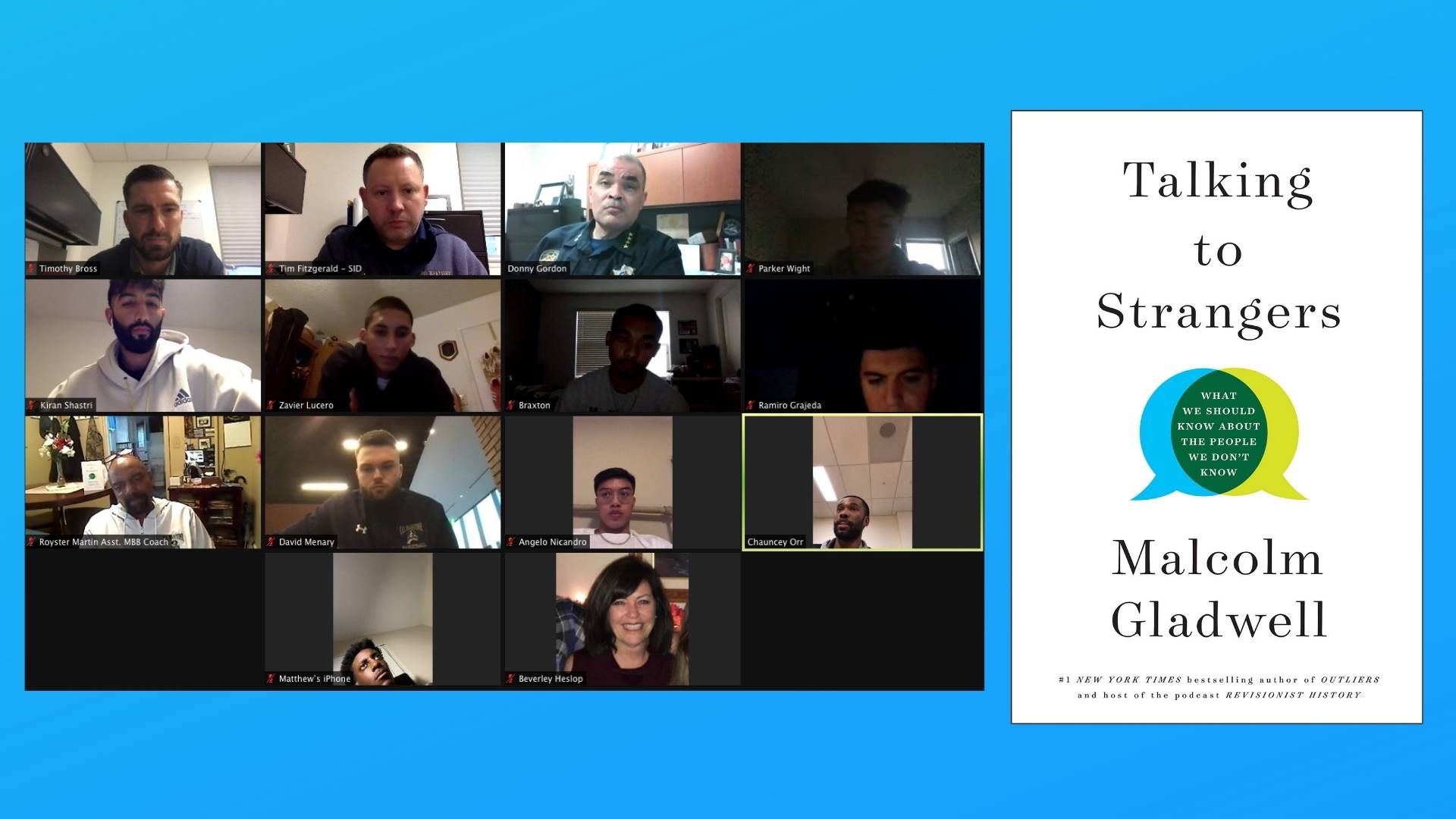 Rarely does a college basketball team’s offseason program include a conversation about a Malcolm Gladwell book with the chief of the campus police department. But this winter, the Cal Maritime Men's Basketball Team did just that as part of the University’s Resiliency Project by reading and discussing Gladwell's Talking to Strangers with Campus Police Chief Donny Gordon. The discussion, team members say, gave them something they can carry into their daily lives.

It took place as part of a University-wide campaign called "Converse & Connect" which is a virtual book circle for faculty and staff to meet and share their thoughts and experiences with one another about a book, chosen for its broad appeal and timely perspective. Spearheaded by Cal Maritime Counseling Psychologist, Ian Wallace, the book circle aims to create space and opportunity to connect with one another through shared experiences where the campus community can better know and understand one another.

Gladwell’s Talking to Strangers studies miscommunication, interactions, and assumptions people make when dealing with those that they don't know. To make his point, Gladwell covers a variety of events and issues, including the arrest and subsequent death of Sandra Bland, British Prime Minister Neville Chamberlain's interactions with Adolf Hitler, the sex abuse scandal of Michigan St. trainer Larry Nassar, and other infamous similar scenarios.

The chapter assigned to the men's basketball team's group discussion was "The Kansas City Experiments" which detailed the KCPD's use of traffic stops as opportunities to confiscate weapons. The chapter ended up being perfect for initiating a dialogue according to Assistant Coach, Chauncey Orr.

"That chapter not only gave us a baseline to talk about policing in the community but also created a myriad of topics for all of us to share our own thoughts and experiences," Orr said. "The Zoom discussion gave a platform for everyone coming from different careers, ethnic backgrounds, and upbringings to share on a topic that is so prevalent in our country at this very moment."

Orr felt having Chief Gordon involved added a valuable view from a law enforcement veteran. "Having Chief Gordon as a part of the dialogue was immense because it provided perspective from someone who has been in that line of work for years," Orr added. "One word that was constantly brought up was "empathy" and making the conscious effort to show empathy towards one another. That we shouldn't prejudge a situation or strangers based on previous notions, looks, or experiences, and to not react off assumptions but look at one another as its own entity that we are willing to gracefully embrace. Hopefully, this conversation is the start of many to come.”

International Business and Logistics major and junior Braxton Adderly of Fairfield, CA felt the discussion was quite a learning experience. "I learned that there are situations that once escalated cannot be deescalated, so it is vital to be able to communicate with empathy and understand one another," Adderly said. "Everyone has a different lifestyle and childhood that has shaped them into the person they are today, whether an officer or a citizen, it is essential to speak with empathy as the main goal is to remain safe.

"It was an honor to have Chief Gordon take time out of his day to join the team in our conversation," Adderly noted. "I had never spoken to a cop before that, and I honestly did not plan to, but I am grateful for my experience. I felt like I gained a friend and hearing him speak on certain topics resonated with a lot of my teammates.”

The appreciation was certainly mutual for the cadet-athletes and Chief Gordon, which reflected how it was discussion rather than a presentation from a guest speaker. "There is an Islamic Proverb that says, 'A lot of different flowers make a bouquet,'" Chief Gordon commented. "Discussing 'Talking to Strangers' with the team was enlightening and inspiring. I think we all walked away from our conversation, with a better understanding of each other. I've stated before, 'humanity requires maintenance,' and I believe we contributed to that process by sharing our thoughts and experiences. I am better for the experience and I thank them for including me."

The goal of the zoom discussion was to reach a greater understanding of "strangeness" — those people, places, and situations unfamiliar to us that may pose discomfort through reading, reflection, and discussion. The group discussed why the approaches taken by the various police departments featured in the chapter yielded the results they did, how their personal experiences shaped their views of the police, what they will do to examine and/or challenge these views, and how the chapter relates to their team.

Junior Matthew Essien (IBL) has been at Cal Maritime for all three years and the Fontana, CA native sees his teammates and coaches a little differently now.  "The biggest thing I've gotten out of it is perspective," Essien said. "We have a diverse team in terms of race and background, so it was enlightening to see the views of others. The book and the discussions have taught me to be more considerate of others when interacting with them and to employ empathy. I think this is a great experience and would love to be a part of it in the future. Having Chief Gordon in one of the discussions was a great opportunity."

Head Coach Tim Bross assigned the reading and arranged the discussion group with help from Dr. Wallace on how to shape the dialogue and overall experience for his team.

"It has been a joy to see the growth that has taken place in reading Talking to Strangers," Bross said. "The dialogue that has emerged from our discussions has been powerful and I am proud of those who have participated. Chief Gordon generously shared his time and provided a unique and valuable perspective. He showed us grace and class and revealed what I believe to be true: when we are distilled down to our component parts as people, we are more similar than different. This is at the core of why we are reading a book as a team, and why I feel so passionately about helping young men become the best people possible."