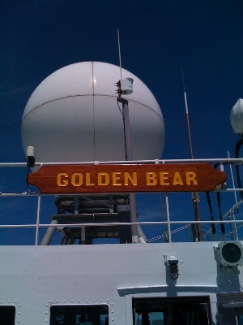 On of the most time sensitive, high pressured and exciting projects that the Information Technology Department undertook was the installation of a broadband satellite system onboard the Training Ship Golden Bear in early 2008.  In December 2007, we did not have any contracts or consultants in place.  Nevertheless, when the ship departed campus at the end of April to cruise the Pacific Ocean for four months, everything needed to be in place and working.  It was a race against time in collaboration with the CSU Chancellor's Office, Vizada/Marlink and AT&T CLSMA.  Indeed, it was  a project that many would have refused to undertake given the circumstances!

Between January and the end of April, the ship’s network was redesigned and $121,000 worth of switches were installed and configured.  A contact was signed with Noregian company Vizada and new satellite antennae was shipped from Norway.  With the aid of a helicopter, the 12’ diameter, 1800 pound antenna was installed directly above the bridge of the ship.

Equally daunting was the challenge of getting the ship to be recognized as a site off our campus network (so that the switches and computers onboard the ship did not need to be reconfigured each time it departed campus) and getting the Exchange servers on the ship and campus to communicate through the limited bandwidth provided by the satellite broadband system.

Complicating the matter, the 300 email accounts on the ship needed to be migrated back to campus while another 300 accounts were migrated to the ship while it was in Honolulu for the five-day change over.  Unfortunately, the 192Kbs satellite bandwidth (64K of which is dedicated to outgoing phone lines) was not sufficient to accommodate this and it proved to be far too expensive to temporarily increase the bandwidth… so alternate secure and reliable methods needed to be developed, tested and deployed.  The change over represented a challenge that was unique to Cal Maritime.

Students and faculty benefited from improved telephone communications.  Four outgoing lines were now available to students (whereas in the past there were only two Iridium phones located in the stairwells).  Students no longer had to wait in line in the stairways for their turn--unavoidably having to listen to the one-sided conversation of the person who was on the phone.  During the 2008 summer’s cruise and all subsequent ones, students placed outgoing calls from the privacy of their cabins.

There were glitches along the way (hardware failures, etc.).  Despite these, most would agree that ship to shore communication was a thousand times better than it was prior years.  For example, he TSGB went without email communications for several weeks during the 2007 cruise and email was stored and forwarded only twice a day.